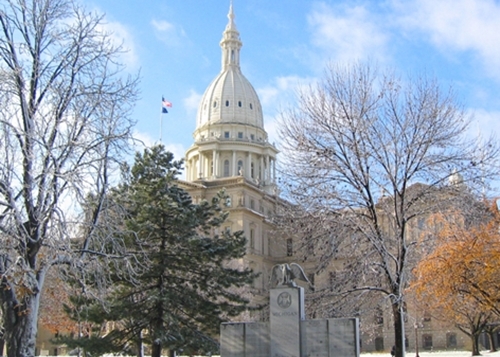 Michigan governmental transparency sank to new lows this week as state lawmakers laid out a plan to scrounge deeper in our pockets for subsidies to lure more business to the state.

In a continuation of the great bipartisan strategy of Jobs at Almost Any Cost, framework legislation to give not-yet-known sums to not-yet-known businesses sailed through the House and Senate on Wednesday and Thursday.

Why? That, too, is not yet known by Michiganders, as some of their representatives were only filled in on what's driving the fast-moving legislation after they signed non-disclosure agreements with the state's economic development agency.

Gov. Gretchen Whitmer is expected to sign them. In a statement to Michigan Advance, a Whitmer spokesman called the bill package “a once-in-a-lifetime opportunity to expand our economic development toolkit to ensure that the state is in a strong position to compete for unprecedented jobs and investment."

“Governor Whitmer’s top priority is working with leaders in the legislature and anyone else who wants to work with us to strengthen our state’s economy and put Michiganders first. The next year will determine the future of our state’s economy for the next 10, 20, and 30 years, so it’s important that we keep our foot on the gas to get it done.”

Setting aside that it remains unknown exactly what level of incentives are truly needed to compete for big projects and whether they're worth the cost (previous reporting by Metro Times on various high-profile Detroit projects found that, for example, Stellantis née Chrysler's east side plant involves nearly $70,000 in public investment per job), opponents say they're not the best way to attract business. As evidenced by Amazon's search for a site for its second headquarters, in addition to giveaways, businesses seek places where people want to live, or with a talent pool that can get reliably to work.

I voted no because reasonable amendments to ensure local hires, transparency and environmental accountability were NOT adopted.

I hope we can soon have a conversation about economic development that solves the issues like workforce, housing and more that matter to our community. pic.twitter.com/piojro7CaR

"Everyone in Michigan wants a stronger recovery from the pandemic that that includes better jobs, wages, healthier communities and a striving future," a joint statement from eight social justice and environmental groups including We The People Michigan and the Sierra Club's Michigan Chapter says. "We believe that instead of just more corporate incentives, providing robust educational opportunities, making transportation more reliable and sustainable, ensuring our water is safe, supporting famlies, and providing better social and built infrastructure pays off."

In short, the spend-tax-money-on-the-stuff-you're-conceivably-supposed-to-spend-it-on-and-they-will-come strategy. The long game.

Separately, notably absent from the debate is Ford's stated reason for taking its EV battery business to the southern states, which was lower power costs. Though industries typically negotiate power rates on a per-project basis, Tennessee offers an average industrial rate of $4.58 per kWh, while DTE and Consumers' average rates for their largest users are $7.59 and $10.94, public-service journalism website Outlier reported shortly after Ford announced its decision in October.

But the focus today is not on DTE or Consumers — which may make sense given that the MEDC nor lawmakers will disclose whether these bills are aimed specifically at securing a battery business.

This is cronyism and corporate welfare. It’s utterly corrupt for legislators to sign nondisclosure agreements connected to bills under consideration. These legislators are supposed to work for the people of Michigan, not secretively cut deals for a few corporate interests. https://t.co/YFWNJqHNrJ

That secrecy is on its own drawing ire, prompting even Crain's, a business publication, to write in a Friday editorial that it sets "bad precedent."