David Weiss: Rittenhouse not hero nor villain, just a little boy with a big gun

David Weiss is a Los Angeles-based freelancer who grew up in Oak Park. He has written for Newsweek, the LA Herald Examiner and Men's Journal and co-founded the band Was (Not Was).

“Can you guys delete my social-media accounts?”

Kyle Rittenhouse -- in police custody after making like Wyatt Earp on the mean streets of Kenosha -- didn’t ask about his victims' condition, but whether his breadcrumb internet trail could be swept up and disposed of. Obviously, incriminating subtext could be found there, if not a figurative smoking gun. 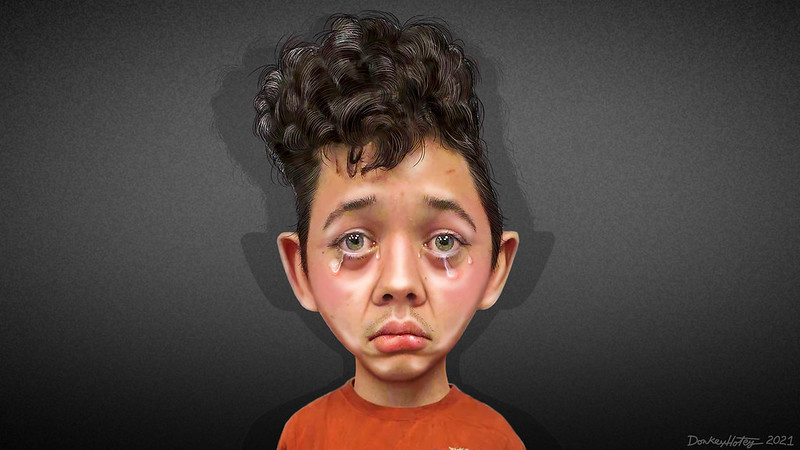 “He didn’t do nothing wrong,” Kyle’s subliterate mom told ABC News a few days later. “He was chased by a bunch of mob.”

Out on bail soon thereafter, Kyle was reunited with his family and none other than Ricky Schroder, eager for 20 more watts of limelight before fading to black forever. And of course, MyPillow moron Mike Lindell pitched in $50K to help get the virgin vigilante back home where a momma’s boy belongs.

Which brings me to my point: Kyle Rittenhouse, whose vilification and lionization are two sides of a well-worn rhetorical coin, doesn’t deserve his role as poster boy for anything except adolescent impotence and a yearning need to be something other than an anonymous nebbish. Put an AR-15 in the hands of a callow, terminally lonely soul and he suddenly thinks he’s all that he can be. (By the way, the Marines rejected him when he tried to enlist, another telling detail in his unspectacular C.V.)

While Saint Kyle (as he came to be known to his deranged, trigger-happy acolytes) was being pilloried on MSNBC and proclaimed noble-and-innocent on OAN and Fox, I saw neither hero nor villain, but was reminded of Hannah Arendt’s startling characterization of unspeakable Nazi atrocities as the “banality of evil.”

In other words, one needn’t be a psychopath to be a cold-hearted killer -- merely a tradesman, a lawyer or even a doctor. Given the proper circumstances (one’s own fate hanging in the balance), any one of us is capable of behavior that transcends good and evil and is nothing more than evidence of our slavishness to Darwinian iron law – eat or be eaten, kill or be killed.

Not that Kyle -- an angry, incel-wimp with an unhealthy fondness for male authority figures (I’ll leave that one as red meat for the Freudians among you) -- was in danger of being shot or strangled the night he strapped on his AR-15.

But I can warrant you this (as a certified armchair psychoanalyst): The former janitor and lifeguard was going nowhere but sideways in life until he discovered the omnipotent feeling of squeezing off four lethal rounds in less than a second, as he did to actual psychopath Joseph Rosenbaum. “Pure adrenaline,” is how one assault weapon hobbyist describes the rush.

Mind you, we may have come to the nub of the issue when neurochemistry is the focus, and not the precious Second Amendment or talk of antifascists or vigilantes. Kyle Rittenhouse has the hollow, vacant eyes that fellow-travelers like John Hinckley Jr. or Mark David Chapman also possessed. They were Grade-A nobodies with delusions of grandeur, and innocent lives would pave their way from obscurity to infamy.

Frankly, as I watched the recent trial, I was neither overcome with liberal bloodlust -- hoping they’d fry the kid or sock him away for life -- nor eager to see him walk, encouraging other solitary ciphers to arm themselves and go looking for trouble, which is exactly what Kyle was in search of that night, not poor bleeding victims needing tourniquets and Advil from a fake medic. He was desperately itching to use that monstrous firearm and stand taller than his actual five-foot-four inches.

P.S., the only reason I felt compelled to write this minor-key diatribe is that not once in all of the coverage of his trial did anyone question his soundness of mind – certainly not his lawyers, who felt confident that self-defense alone would acquit their lovably innocent and blubbering Babyface Nelson. Seriously, that pathetic crying scene ought to win the kid a Golden Globe if nothing else.

Maybe Ricky Schroder could stick around long enough to school young Kyle on the finer points of the thespian life. Then again, Matt Gaetz and Paul Gosar have threatened to hire him as an intern, but don’t bet on it. As fast as the kid rose like gunsmoke, he will fall with a thud like last week’s tabloid news. In five years, he’ll be back at the Y as a lifeguard, bossing kids around and signing autographs.